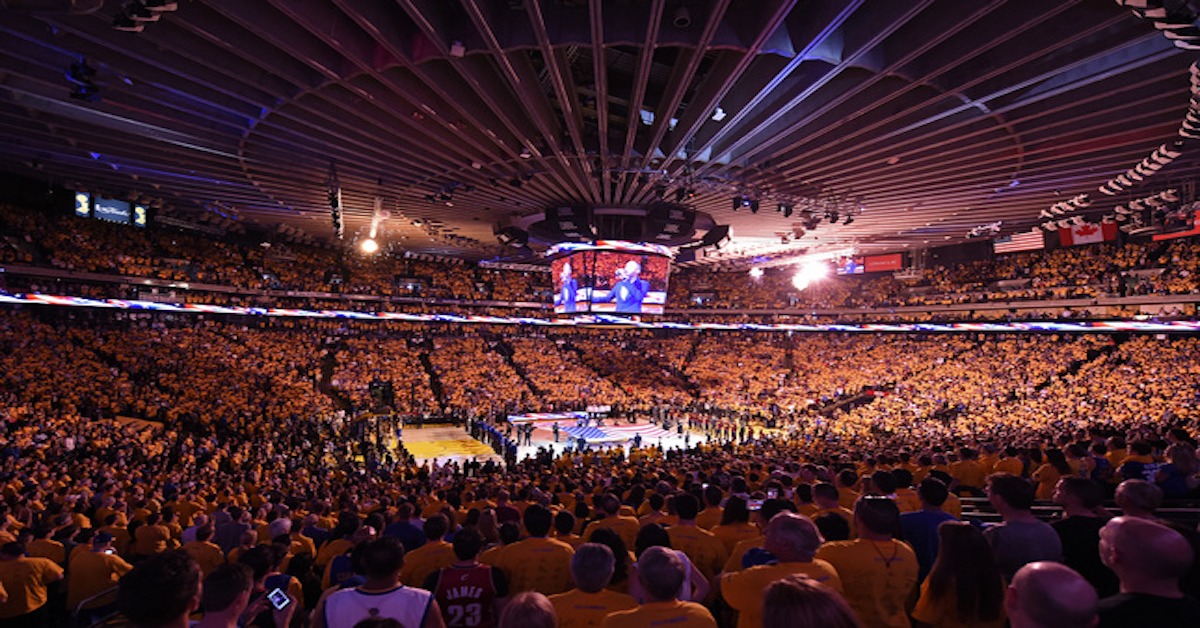 I watched Game 7 of the NBA Finals with Kurt Vonnegut.

Actually, I watched it with my four kids, Maverick, Travis, Cassidy and Jessica, my wife BettyJane, and our two dogs, Bandit, and HOV.

Vonnegut just whispered into my ear, from time to time, from afar.

The chance of the six of us being in sync for two hours is as remote as an NBA team being down 3 games to 1 and coming back to win a championship.

I don’t know how it actually occurred, to sit down together to watch the game, as it most certainly was not planned.

The six of us eating, drinking and talking amongst each other as if there was no other place anyone of us wanted to be.

Somewhere during the first half, my wife and I caught eyes and we both realized just how special this moment was.

It was then when I first realized Vonnegut’s presence,

As human beings, we so rarely notice when we are happy,” he whispered in my ear.

I savored the moment.

As a bandwagon fan rooting for the Golden State Warriors I was extremely displeased when the NBA suspended Draymond Green for game 5 of the finals.

The conspiracy theorists shouted the NBA wanted the series to go longer, to force a Game 7 which would generate millions of dollars.

At first, I too was crying foul.

Tonight, as I just look around and see my family all in one place, I would like to thank the NBA forcing a game 7, whatever their selfish motivation might have been.

For without a Game 7, I’m 100% positive we each would have been involved separately with something of less importance.

But thanks to Kiki Vandeweghe and the NBA, there is a Game 7.

And Game 7’s are special.

People stop their lives for them.

People gather together to see the magic.

Because fates are determined.

Game 7’s are the one time where you are guaranteed to see one competitor go to Disneyland, while simultaneously seeing another falling uncontrollably down the mountain, like the skier on the Wide World of Sports promotion.

There is so much at stake.

In sport, there is no bigger spot than a Game 7.

They happen when two sides have won the same amount as they have lost.

Game 7’s are a teams culmination of great wins and devastating defeats.

In life, the most important team you will ever play for is your family. And you need to live every day like it is a Game 7.

However long the season has been or however beaten, battered and injured you are, none of that matters when another day arrives. The only thing that matters is the need to put forth your best effort. To execute in a big spot.

Sometimes a family, like a team wins with a team effort.

Sometimes a family like a team needs for someone to carry their teammates on their back and carry them.

Sometimes in the game, like in life, there is no set play when you are diving for a loose ball – you just use your sheer will and tenacity to get it.

Sometimes life is designed so you could be the one to do something that has never been done before, to come back from being down 3 games to 1.

“Tens of millions of people are viewing this game worldwide,” the announcer says.

It is then Vonnegut says to me,

“Although some people in life are celebrities on a national stage, other people’s destiny is not to be famous, which is actually more admirable and of much more importance. People’s destinies are to serve the place where they find themselves needed and feel most fulfilled, no matter how small or obscure it may seem to the rest of the world.

I am certain you are highly valued and badly needed right where you are, here with your family.

Your destiny is to build, strengthen and hold your family together.

For families are all that is important in the world.

The rest is Hoopla.”

When I look back at Game 7 many years from now it will not be the Kyrie Irving’s go-ahead 3 point shot with under 10 seconds to go that I will remember, or LeBron James hitting a free throw with an injured wrist to seal Cleveland’s first Professional Sports championship in over 60 years, but rather it will be Kurt Vonnegut’s message to learn to acknowledge and appreciate the small sweet moments of everyday life – as he would say,

The rest is Hoopla.