There is a scene in the pilot episode of Friday Night Lights, where Tim Riggins turns to his teammate Jason Street and says:

“Here’s to God, football and in ten years from now, good friends living large in Texas.”

They toast, as they gaze into the future.

A bright future, one which has Jason Street on a clear path to the NFL.

They are on top of the world.

Tim Riggins and Jason Street would soon learn that sometimes, Texas is not forever.

Or at least, not here on earth.

In his next football game Jason Street would take a hit that would paralyze him for life.

And in one play many lives would, forever change.

Tomorrow I get to attend the 32nd Annual Kujan Memorial Wrestling Tournament.

Kevin and Stephen Kujan died tragically in a motorcycle accident in 1984, only a few years after graduating high school.

Kevin and I were teammates for 6 years.

For the majority of the last 32 years, in honor of a teammate, I have sat in the William Floyd stands on the 3rd Saturday in January.

And I will do so again tomorrow.

Kevin was one of the strongest persons I ever met.

He was freakishly strong.

Strong, as in if he held you in a tight waist your priority wasn’t to get out – it was just to attempt to breathe.

I remember for two seasons in junior high, Kevin was undefeated and unscored on.

His opponents didn’t score one point on him.

Not one takedown, not one escape, not one reversal.

On the same day of the Kujan Tournament, another wrestling teammate of mine, Chris Clay, will be inducted into the William Floyd Athletic Hall of Fame.

Chris recently lost his life in an ATV accident.

Chris was a tough, hard nosed, competitive athlete who had a smile that never left his face.

Not only were Kevin and Chris great wrestlers, they were great human beings.

Both Kevin and Chris are truly missed by all who have ever come in contact with them, especially by their families and close friends.

Memorial tournaments are an all too real reminder that we are not invincible.

One day you are in a picture with a teammate, a friend, and a few years later they are gone.

We need to understand, embrace and fear that vulnerability.

No one is invincible.

Knowing “Texas is not forever” has to drive our daily actions in our lives.

If there is ever a time you leave a loved one on bad terms, go back and mend it.

If there ever is a time in your life that you find yourself unhappy, immediately correct whatever needs to be corrected for you to find happiness, as you shouldn’t waste one second of your life in any state other than joy.

Life is a great thing, not to be wasted, overlooked or to be taken for granted.

If there ever is a time that you feel invincible, attend a memorial wrestling tournament honoring someone you know.

It will ground you.

High school, like life, is a time of innocence and invincibility.

Every second of every day needs to be lived.

Every chance we get, we need to express our love to the people who are most important to us in our lives.

Life teaches us ever too quickly that every “Texas Forever” moment that we believe will last,

We need to cherish life.

We need to live it.

We need to embrace it.

We need to bask in it.

Having sat in the stands for the majority of the last 32 Kujan Memorial Tournament’s made me want to start a thread on LIWA for people to get to know more about the individuals that the memorial tournaments honor.

Even though the feeling of “Texas” may not last forever,

So, if you ever want to find me on the 3rd Saturday in January, I’ll be in my usual spot.

Top row in the stands at William Floyd High School.

“Sometimes, Texas is not Forever”

and 50 other wrestling stories can be found in:

Wrestling Writing:  Capturing the People and Culture of the Greatest Sport on Earth. 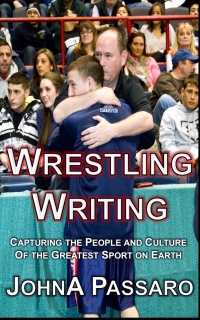